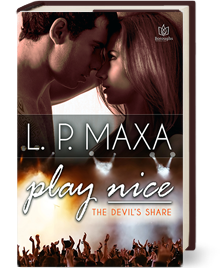 Rock a stadium. Bang a chick. Repeat. As lead singer of The Devil’s Share, Dash Conner could get anything or anyone he wanted—until he met Lexi Grant.

For Dash Conner, lead singer of The Devil’s Share, everything he wanted was his for the asking. Whiskey. Drugs. Money. Sex. But not Lexi Grant. For the first time since he picked up a guitar, a girl was actually demanding he woo her. For a chance with her, Dash would do that and more.

Lexi Grant was no groupie. Just because the biggest rock star in the world smiled at her didn’t mean she had to fall into bed with him—but it was going to be awfully hard to resist that impish smile and those tatted abs. Surely one night of fun wouldn’t hurt anyone.

Unless that night ends with a broken condom.

For Lexi and Dash, that’s just the beginning. Add an overly affectionate pit bull, a missing guitarist, a house full of sorority girls, a junkie ex-bandmate and an extreme aversion to Jäger, and it’s either a recipe for disaster or true love.