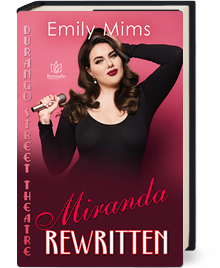 Alone and lonely is not where Miranda pictured herself, but life has dealt her a crap hand, and now she has to decide if it's worth taking on a man whose history she knows all too well.

Durango's production manager, Miranda Jenks is straightforward and honest. She deals with life head-on no matter what it brings, and she's not afraid to speak her mind. But... she's been harboring a soul-destroying secret for years, and when Ross Ellis returns to town to try to clean up his mess, she can't tell him the truth.

Ross has made more mistakes than he can count, and all of them are worse than horrible. The only reason he's bothered to come back to his farm is for his teenage daughter, and he hopes like hell she'll let him make amends.

Miranda is the last person he'd thought would forgive him, and as they spend more time together he finds they fill each other's gaps. Until he uncovers the lies she's been keeping for years.

Two lonely people who understand each other better than most must find a way to heal the breach or they'll never get to the happy they're reaching for.