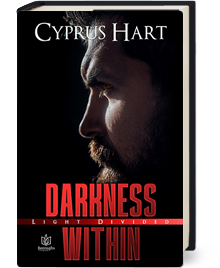 So not what she expected - Aideen's descent into darkness might lead her to a brighter future than she could've ever imagined.

Aideen Duffy's job is hunting down the dark creatures who are trying to overthrow human society and bring the world back to how it used to be when vampires, werewolves, and their ilk were in charge.

The culmination of two years' work, she’s closing in on Costecu, the vampire responsible for the most deadly cell in her city. When the op goes sideways, instead capturing the elusive bastard, she ends up with second prize: his right-hand man, Druain Lindberg.

What happens next, she couldn’t have planned for in a thousand years.

Deep undercover, Drew is swimming in the blood of Costecu's treachery, but he'd do anything and everything to destroy the heinous vampire who'd ruined his life.

With the stink of evil ground into his pores, he's ordered to kidnap Aideen and bring her to Costecu, but this time following orders is not going to happen. The spirited selkie can't be cowed, and something in her calls to him.

When Drew risks long-held plans to save Aideen, everyone - good and evil - are after them. Keeping them hidden long enough to escape is not as big a problem as her letting him do what his heart compels him is essential - protecting her with his life.