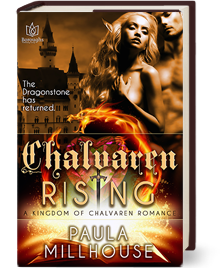 The Dragonstone has returned. With the love of Kort, Chalvaren’s warrior-prince heir, Mia Ansgar will seize her birthright and become the great dragon-riding wizardess prophesied to free that elven kingdom from her embittered sorceress kin.

Twenty-five years ago, Theo Ansgar abandoned the Kingdom of Chalvaren for a hiding place on another world. Some called him traitor. Some, thief. Now his fully grown daughter Mia must return to the land of her birth...and their war.

It was the elf prince Kort Elias who brought her back. Theirs was an instant connection, an inescapable union of body, soul and sorcery, reminding Mia of what she truly is, and what she must become. There is also Magnus, destined to be more potent than any wyrm Chalvaren has ever seen, a three-day-old dragonlet Mia must nurture and then ride. And then there is the Dragonstone, an artifact of power nonpareil. Joined, they can tip the scales of battle against the wraith-possessed forces of darkness, of Mia’s own embittered kin. Redemption will be offered, the protected will become the protector, and an ancient prophecy will come to fruition, but only righteous love can conquer all.