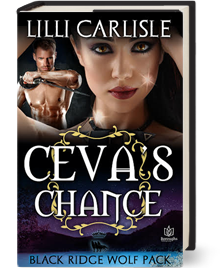 For millennia white witch Ceva has been alone and thought she'd remain that way forever - until she met the fierce warrior captain, Lothar.

If it hadn't been for King Leonidas, white witch Ceva would have roamed the earth alone and ostracized. She was a biological accident, and her heritage was a curse she'd carry around for all her days. Now she fights for her king and kingdom, a fierce warrior on a mission to prove she is worthy of the trust and friendship the king has afforded. When she meets Lothar, captain of the Black Ridge Wolf Pack guard, she glimpses a future she never thought possible. But once he knows her truths, he will surely reject her.

ONLY HE CAN SET HER FREE

Lothar had never met anyone like Ceva. Beautiful, fierce, protective and loyal, she would make the perfect mate for any man. Lothar wants to be that man, but Ceva remains elusive. Sure, she flirts, and they dance around each other, but Lothar wants more. When his team joins hers on a dangerous mission, he learns her secrets, which makes her more extraordinary, not the pariah she believes she is. But her past is about to catch up with her, and only his love can save them from certain death.